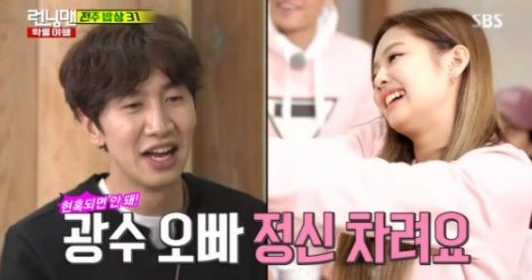 BLACKPINK made its first network TV variety show appearance on SBS’s Running Man that aired on December 18 and showed off their charms.

On the show, the cast played the “31 Jeonju-style dishes game”. Hot sauce was poured on the dishes, and losers had to eat the dishes.

The first loser was JENNIE. She asked Lee Kwang-soo, who was in the other team, to help her. JENNIE handed Lee Kwang-soo tortillas with hot sauce on them with a charming smile. Lee Kwang-soo said yes as if he was mesmerized by JENNIE’s smile. After watching them do this, Ji Suk-jin said, “She knows she’s pretty” and made everyone laugh.

Meanwhile, when JENNIE was asked if she likes Lee Kwang-soo, she answered, “I’ll answer when he eats the food.” When he did, she looked away and split everyone’s sides.