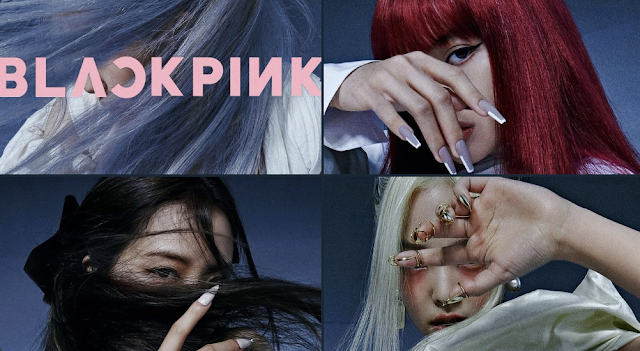 On June 15 at 9 AM, YG Entertainment uploaded BLACKPINK’s comeback teaser poster through their official blog. The members presented a hip vibe with their fierce looking styling and makeup, grabbing the viewers’ attention.
With her red eye makeup, JENNIE presented a sexy yet luxurious aura. The ash blonde hair color flowing beside her face and the black ponytail hair made her look mature. JISOO’s half-up ponytail fixed with a ribbon revealed her chic looking eyes. LISA presented her unique girl-crush look with her red hair which made a contrast with her white based clothing. ROSÉ tried something different with her delicate looking ash blue toned hair, noticing her glamorous appearance.
BLACKPINK will make comeback on the 26th with their pre-release title song. They will then release two songs between July~August in special formats, followed up by their first-ever album release in September.
The song ‘Sour Candy’ by BLACKPINK and Lady Gaga, topped iTunes charts in 57 different regions of the world and the Global YouTube Song Top 100 chart after its release on May 28. The song also entered two of the world’s biggest Pop music charts including the US ‘Billboard Hot 100’ and UK’s ‘Official Chart Singles Top 40’ as no. 33 and no. 17, respectively.
Source: YG-Official