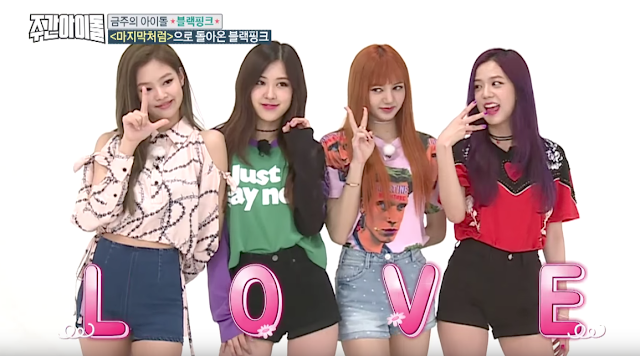 YG's girl group BLACKPINK seemed to be more comfortable doing variety shows when they went on Weekly Idol.
On the July 5’s episode of MBC Everyone’s Weekly Idol, BLACKPINK came on as a guest. The group has recently made a comeback with “As If It’s Your Last”.

BLACKPINK has appeared in a number of variety shows since they last appeared on Weekly Idol. When Defconn and Jung Hyung-don asked BLACKPINK members how they feel about coming on the show again, they answered that it feels comfortable as if they were at home, which brought big smiles to the hosts’ faces. Then, Jung Hyung-don asked JISOO if she gets worried over malicious online comments, and she answered, “No, they’re fun.” The choreography of “As If It’s Your Last” is loved by many people, and BLACKPINK commented, “YANG HYUN SUK himself changed the last part to blowing kisses. It was supposed to be something else.” They then showed what it was before, which was making a “LOVE” with their fingers. Jung Hyung-don made people laugh by saying, “I like the original version more”.

Then, BLACKPINK members did the random play dance, the prize of which was chicken and strawberry ice flakes. JISOO did the worst, but she was bold enough to continue on dancing even after making a mistake. In the end, BLACKPINK was able to win the prize. 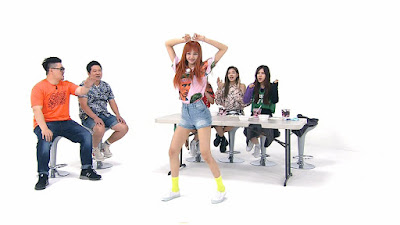 In the Idol Call Center segment, BLACKPINK sang their second tribute song for their boss YANG HYUN SUK. However, the emcees complained that the melody sounded too similar to that of “Milk Song”. JISOO made up witty lyrics using words given on the spot and received a round of applause.

When asked about IU wanting to do a duet with her, ROSÉ answered, “My dad texted me her interview in our family chat room. I couldn’t believe my eyes. I told him that and he even sent me a video. I’m so honored. I will practice singing a lot from now on. I have a lot of respect for IU.” She then sang IU’s “You And Me”.

JENNIE made a cute poem using “Kwon Ji Yong”. The poem went, “Kwon Ji Yong! If this poem isn’t funny, people might hate me.” Then, BLACKPINK members said that they go to a karaoke often and showed their free spirit by wearing masks and playing tambourines.