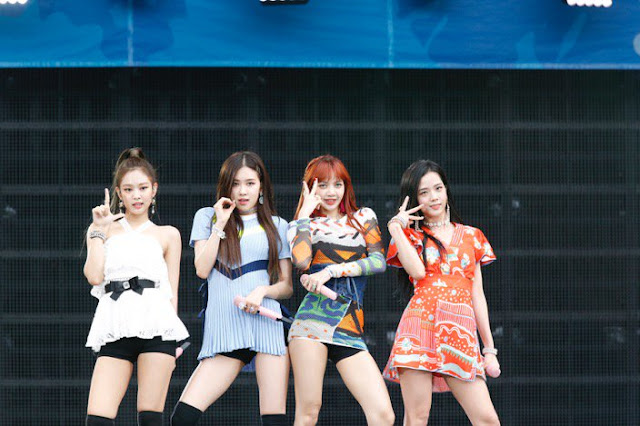 “The next BTS will be one of the girl groups”.It is what music critics from in and out of Korea have been emphasizing during the past year. Many boy groups including SEVENTEENㆍMONSTA XㆍGOT7 are establishing a strong overseas fandom through world tours for the past 2~3 years, but people will be paying more attention to girl groups considering the nature of the music market which pursues freshness. With approximately fifteen days passed in 2019, the estimation is becoming reality.

The number of people subscribing on the ‘BLACKPINK’ official YouTube channel also surpassed 17 million. After receiving the Diamond button along with ‘BANGTANTV’ (14 million) last year on August for surpassing 10 million subscribers, the number has been growing even more rapidly. BTS reveals official contents including MVs through the agency’s official channel, so the number of users subscribing to ‘ibighit’ (20 million) is higher. On the other hand, YG Entertainment operate channels separately based on each group, so the agency’s official channel has less subscribers when compared, with approximately 4.3 million.

The most beneficial factors in increasing channel views are MVs and choreography videos shot during practice. It is because it’s necessary to learn the choreography to participate in the ‘Kpop in public challenge’, a challenge of performing a cover dance in a public place which is becoming popular in countries including VietnamㆍThailandㆍIndonesia. Certain choreographies such as the ‘IDOL challenge’ (BTS) or the ‘Baby shark challenge’ (Pinkfong) become a trend, but people usually tend to cover girl groups in general.

The number of BTS music plays generated from YouTube for the past year. It adds up to 5.4 billion plays. [Data from YouTube]

The number of BLACKPINK music plays generated from YouTube for the past year. They reached 2.8 billion plays. [Data from YouTube]

Everything adds up with YouTube’s music chart and statistical data. The number of BLACKPINK music plays for the past year add up to 2.8 billion plays. The countries that played BLACKPINK’s music are ranked from Indonesia-Thailand-Philippines-Vietnam-Korea. With LISA from Thailand as the center, the group is receiving heated popularity in Southeast Asia. As a result, BLACKPINK who started their first-ever world tour in Bangkok, Thailand on the 12th and 13th sold out all tickets and opened an additional concert on the 11th. However, BTS who reached 5.4 billion plays for the past year shows an even distribution among regions ranked from the US-Vietnam-Indonesia-Japan-Mexico. 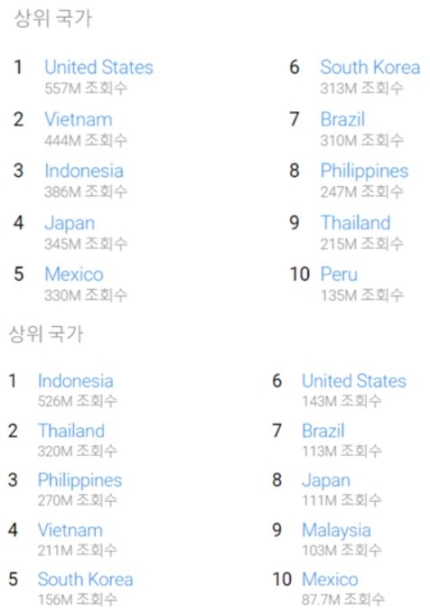 The top 10 countries that played music by BTS (top) and BLACKPINK (bottom) on YouTube for the past year. [Data from YouTube]

Billboard paid attention to this nature and uploaded an article titled, “How did the K-Pop ‘Girl Crush’ grab the hearts of global female music fans”. It is that the MV for ‘DDU-DU DDU-DU’ shows the message of feminism with LISA appearing as a scientist and exerting power with a pink sword and hammer. During the press conference held prior to the release of the album, BLACKPINK explained, “’DDU-DU DDU-DU’ can be the sound of gunshots and a spell to fight back”. The title of their album, ‘SQUARE UP’, also contains the meaning of standing tall and facing hard times with confidence.

The fact that no other groups emphasized the girl crush concept after Brown Eyed Girlsㆍ2NE1ㆍf(x) also helped BLACKPINK. There have always been demand on girl groups that does not fit the category of ‘pretty or cute or sexy’, but no team satisfied the people’s demand. Editor-in-chief Mimyo from the web-magazine ‘Idology’ analyzed, “The overseas fans consider BLACKPINK as the successors of 2NE1, who are regarded as the origins of K-Pop girl crush”. He added, “2NE1 announced their expansion into the US but were not active, so the people’s longing for them have been absorbed to BLACKPINK”. 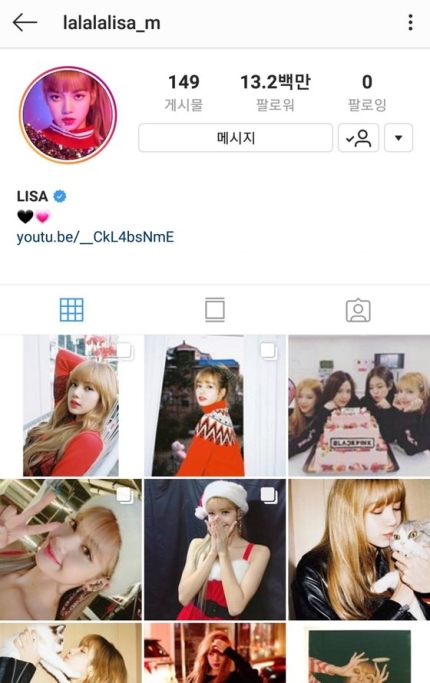 It also relates to how BLACKPINK is accessed by fans. While BTS communicate with the fans through Twitter, BLACKPINK utilizes Instagram. BLACKPINK exists as wannabees for the fans, so Instagram that focuses on images and videos rather than Twitter which emphasizes on messages fit better to the group. According to YG on the 14th, all members of BLACKPINK surpassed 10 million followers including LISA (13.23 million) who was ranked at no. 1 among all female celebrities in Korea, JENNIE (11.87 million), ROSÉ (10.16 million), and JISOO (10.03 million). Taeyeon of Girl’s Generation (12.99 million) was no. 1 among all female celebrities at the time Instagram announced the ‘Top 10’ accounts during the year-end of 2018.

Professor Lee Gyutak from George Mason University explained, “As K-Pop is accessed through not only music but also through MVsㆍcover dancesㆍreaction videos, fashion is also becoming a very important factor”. He added, “Like G-DRAGON and CL getting invited to Chanel’s fashion show, some people approach them as fashionistas or celebrities rather than as artists”. BLACKPINK who announced their expansion to the US by partnering with Interscope Records, the representative music label of Universal Music Group, will continue their tour during the first half of this year in AsiaㆍNorth AmericaㆍAustraliaㆍEurope. They were also included in the lineup of Coachella Valley Music and Arts Festival, the largest music festival in the US, on April 12th and 19th for the first time as an idol group. The global fans are highly anticipating BLACKPINK’s upcoming performance.